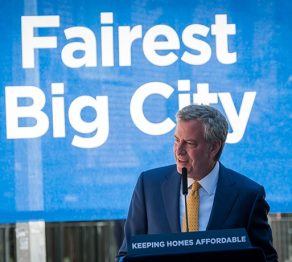 Mayor de Blasio announced that his administration financed 32,116 affordable homes last year, breaking the all-time record previously set by former Mayor Ed Koch in 1989 of 25,243 units. The City also broke the record for the most new construction with 9,140 affordable homes; almost 60 percent of all homes financed will serve New Yorkers making less than $47,000 for a family of three.