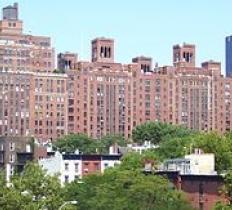 Chelsea is a neighborhood on the West Side of the borough of Manhattan in New York City. The district’s boundaries are roughly 14th Street to the south, 30th Street to the north, the western boundary of the Ladies’ Mile Historic District – which lies between the Avenue of the Americas (Sixth Avenue) and Seventh Avenue – to the east, and the Hudson River and West Street to the west. To the north of Chelsea is the neighborhood of Hell’s Kitchen, also known as “Clinton,” to the northeast is the Garment District, to the east are NoMad and the Flatiron District, to the southwest is the Meatpacking District and to the southeast is the West Village containing Chelsea Historic District extension.

The neighborhood is primarily residential, with a mix of tenements, apartment blocks, city housing projects, townhouses and renovated rowhouses, as well as the many new latest style development now.  Chelsea’s retail businesses reflect the diversity of the population. The most exciting  part of Chelsea has become a center of the New York art world, with many art galleries located in both new buildings and rehabilitated warehouses.

Chelsea takes its name from the estate and Georgian-style house of retired British Major Thomas Clarke, who obtained the property when he bought the farm of Jacob Somerindyck on August 16, 1750.

The new neighborhood thrived for three decades, with many single family homes and rowhouses, in the process expanding past the original boundaries of Clarke’s estate, but an industrial zone also began to develop along the Hudson. In 1847 the Hudson River Railroad laid its freight tracks up a right-of-way between Tenth and Eleventh Avenues, separating Chelsea from the Hudson River waterfront. By the time of the Civil War, the area west of Ninth Avenue and below 20th Street was the location of numerous distilleries making turpentine and camphene, a lamp fuel.