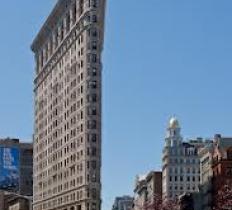 The Flat Iron District is named after the Flatiron building on the 23rd Street between  Broadway and Fifth Avenue. The Flatiron District became one of the city’s most exciting areas of technology, commerce and nightlife in the last century. Publishers, advertising agencies and tech startups have replaced the dominant clothing and toy manufacturers inspiring the Flatiron’s nickname “Silicon Alley.”

The Flatiron Building, one of the oldest New York City skyscrapers is shaped like a triangle.The Flatiron is heavily influenced by its commercial venues, including the big-box retailers that dominate Sixth Avenue. At the center of the square on any given day you'll find a colorful, ever changing street scene of entertainers, eccentrics, merchants, and city folk passing through  or stopping to meet.

Union Square Park is also the home of the City's best farmer's market, which offers a full bounty of specialty, artisans and other fresh local and regional foods year-round, four times weekly. During the winter holidays, the Square hosts a seemingly endless holiday gift market. Surrounding the Park are blocks of stores from chain favorites to gourmet food stores like Whole Foods and Trader Joe's. The streets that surround the Square are lined with restaurants that overflow each evening with an after-work crowd, but you'll find no shortage of spots to meet for a more intimate drink or coffee. The area is convenient to most of the City, served by the 4, 5, 6, L, N, Q, R, and W subway lines.