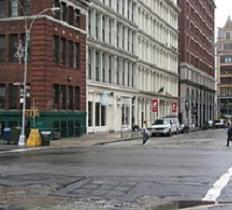 NoHo, for North of Houston Street (as contrasted with SoHo, South of Houston) is a neighborhood in the New York City borough of Manhattan. It is bounded by Mercer Street to the west and the Bowery to the east, from East Ninth Street to East Houston Street. NoHo is primarily made up of loft apartments, which in turn makes it one of the most expensive and desirable neighborhoods in Manhattan. Its small size and central location also contributes to a high demand, again keeping prices high.

The NoHo Historic District, which comprises approximately 125 buildings, represents the period of New York City’s commercial history from the early 1850s to the 1910s, when this section prospered as one of its major retail and wholesale dry goods centers. Acclaimed architects were commissioned to design ornate store and loft buildings in popular architectural styles, providing a rich fabric against which shoppers promenaded, looked at display windows, and bought goods, and merchants sold products. The district also contains early-nineteenth century houses, nineteenth- and twentieth-century institutional buildings, turn-of-the-century office buildings, as well as modest twentieth-century commercial structures, all of which testify to each successive phase in the development of the historic district. Today, the effect is of powerful and unifying streetscapes of marble, cast-iron, limestone, brick, and terracotta facades.

The NoHo Historic District was designated by the LPC in 1999 and expanded in 2008. Additionally, another district in the neighborhood, the NoHo East Historic District, was created in 2003. The designations followed considerable effort by and strong support from numerous local community and preservation groups, including the Greenwich Village Society for Historic Preservation, and together, they form a contiguous area of landmarked buildings over 21 city blocks.

The 2008 extension is bounded on the west by Lafayette Street, on the east by the Bowery, on the north by East Fourth Street and on the south by Bond Street. It includes 56 buildings and a midblock parking lot to the south and east of the existing Noho Historic District. Historically, this area was an enclave for well-to-do families. Most of the buildings in the extension were built between the 1860s and the early 1900s, when the area had become one of the city’s major commercial and manufacturing districts. By the late 1800s, larger commercial lofts became the dominant building type and in the 1950s artists began to move into studio spaces.

Some individual landmarks in the NoHo Historic District include: the Astor Library, the Bayard-Condict Building, the Bouwerie Lane Theater, the DeVinne Press Building, and the Old Merchant’s House. Even two subway stations, Astor Place and Bleecker Street, are landmarked.